We are familiar with the Greek goddesses Aphrodite of love and beauty, Athena of war and wisdom and Artemis of hunt, nature and birth. But how about the Greek goddess of magic, witchcraft and queen of ghosts?  The myth of Hekate is worth discovering.

Hekate inherited her powers over heaven, earth, and sea from her parents. Hekate was the daughter of Perses or the god of destruction and Asteria, the goddess of falling stars and nighttime prophecies. Hekate was never wedded and she never had a regular companion making her known as the virgin goddess. However, the sea monster goddess Scylla was said to be her child in Phorkys, the old man of the sea.

Hekate is not only known as the goddess of magic but also the queen of the darkest nights and wise gatekeeper of the worlds. She has been described in classic Greek mythology as a goddess with a torch carrying light and wisdom to the world, keys to open the gates between worlds and entrance to the concealed knowledge of what’s beyond. The torch of light that she is holding can help illuminate a person on the subconscious and be guided on the path of wisdom. She is also holding a knife to cut the cord as midwife and to separate the body from its life force at death.  Did you know that Hekate portrays the various stages of a woman’s life as a mother, maiden and crone? She also represents the states of mind, body, spirit as well as birth, life and death.

The Triplicate Face of Hekate

Hekate is also known as the goddess of the crossroads. She also has a special form as triple goddesses with three-way faces of a horse, a snake and a dog. Black female lambs are being sacrificed to her. Hekate is like an owl, full of wisdom and an absolute mystic with her ability to see into three different directions at once and also had the capacity to perceive and transport in the secret lands.

Being a crone originally has a positive image. The crone is compassionate, revolutionary, liberator, a healer and bringer of relief especially to the bitterness of death and endings. In the beginning, a crone as Hekate is a respected older woman or grandparent. Offerings were left to her and were eaten by the poor whom she protected. Hekate teaches blind justice and tolerance of the less fortunate. She helps dispense justice blindly and equally. However, during the middle ages, a lot of wise woman and midwives were persecuted. Hekate was not exempted and demonized in the early Christian era. She was described as an ugly old woman and she has been perverted by the degraded society and religion.

Hekate is knowledgeable about medicinal plants and so garlic, aconite, dandelion, lavender, willow belladonna, hemlock, mandrake and poppies are all considered sacred by this goddess. She is an expert of the universal laws of nature, conscious mind as well as the secret powers to manifest one’s desires. She can see the past, present and future. Hekate is known as the Queen of witches and she has the power to change the destiny and luck of a person. 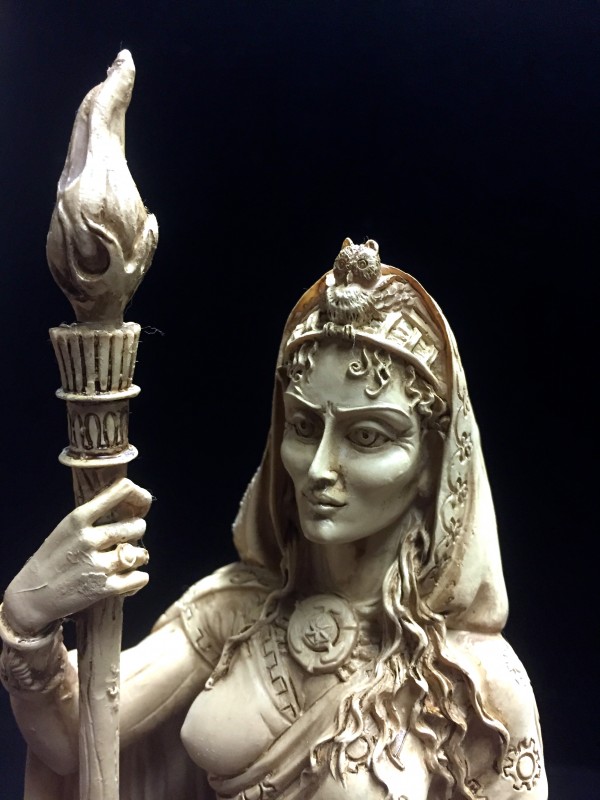 Hekate had a very significant role in Greek Mythology. She belongs to the Titans. They have ruled in heaven, on earth and in sea. Titans granted affluence, triumph and knowledge on mortals, good providence to sailors and hunters, and richness to youth and to the herds of cattle. Hekate has the power to suspend any blessing if she sees that the mortal did not deserve it. Hekate was the only one among the Titans who maintained this kind of power under the rule of Zeus due to alliance, she was respected by all the immortal gods.