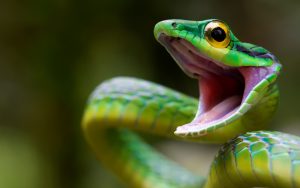 Snakes belong to the class of reptiles, these are cold-blooded organisms, instead foot snake acquired a moveable spine. They move wavy slalom body , or they can move in a straight line and when you pass through the narrow corridors . The snake retreats and avoids man, but if there is an unexpected encounter ,suffice it to stop , avoid sudden movements and wait for the snake escapes. Among the poisonous snakes there , which is important for obtaining the poison prey rather than for defense. 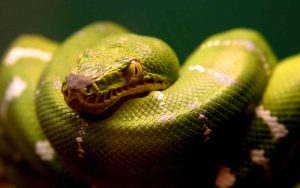 The viper is part of the family of venomous snakes.The viper generally has a broad, triangular head, and the eyes have vertical pupils. Most vipers give birth to living young from eggs hatched inside the mother’s body. There are two types of vipers, pit vipers and true vipers. Pit vipers have pit organs between the eyes. You can see 100 species of pit vipers all of the world except Australia. Copperheads, rattlesnakes and water moccasins. True vipers do not have any pit organ between eyes, there are 50 species of true vipers, you can find them in Africa, Asia and Europe. Mainly you can see them in places that are very wet like rainforest also they live in the mountains. True vipers mainly ears amphibians and snake can survive one year without food. Their bite is very strong, if this snake bite you, you will need instant medication because you can lose too much blood. This snake has very soft skin, and many people are trying to kill this deadly snake because of the skin, and they risk to lose life because of that. 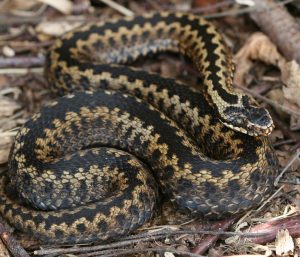 This snake is common, you can only see them in north and east of France, snake can grow 90cm. It has red eyes, flat head and color is olive green with darker bands. Adders are active during the day, spending time basking until their body temperature is high enough to hunt for food 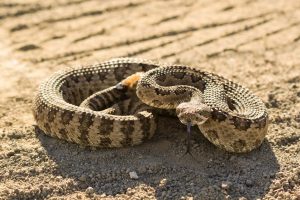 The rattlesnake has been one just one of venomous snakes, its pit viper snake. It’s about four feet long, you can see 16 different rattle snake varieties and in different colors. LL Rattlers are identified by the rattles at the end of their tail. Rattlesnakes are dangerous and when disturbed, coils up and rattles a warning. If it is cornered, it will definitely strike. As cold-blooded animals whose body temperature depends on their surrounding environment, rattlesnakes prefer mainly hot, dry locations. It is a very long snake, and dangerous, some people believe that diamondback must rattle before striking but this is not true! Strike can be silent, this snake eats rabbits, mice and rats. 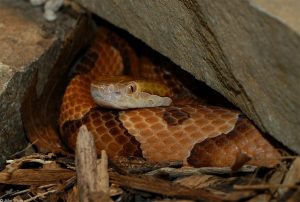 Cooperheads snakes from the pit viper family, which means that they are below the nasal openings are two wells in which there are thermal receptors. which allow these snakes to locate prey using heat emitted, you can see them in parts of the southern states of the North American continent and some parts of Mexicno. They prefer forest hills and wetland plains, it’s very rare case that people see this snake during the day, they are hiding in place underneath the fallen trees, rocks or holes. This snake loves to go outside when the weather is rainy, and reacts very aggressively occupy a distinctive position to attack at the end of the tail vibrated quickly and hitting him after, this snake produce warning sounds identical to the one rattlesnakes sound. Food for this snake consists of small mammals, birds, lizards and frogs.