It may come as no surprise to you that Dark Souls 3 is a tough and punishing game. That doesn’t mean that it’s impossible, though. In-fact, the more you know about the game and its nuances, the more manageable it can be to handle its challenging environment.

We’ve learned a lot during our 40 hours in Dark Souls 3, and felt that it’d be a good idea to share some of them.

Rolling is the key to victory 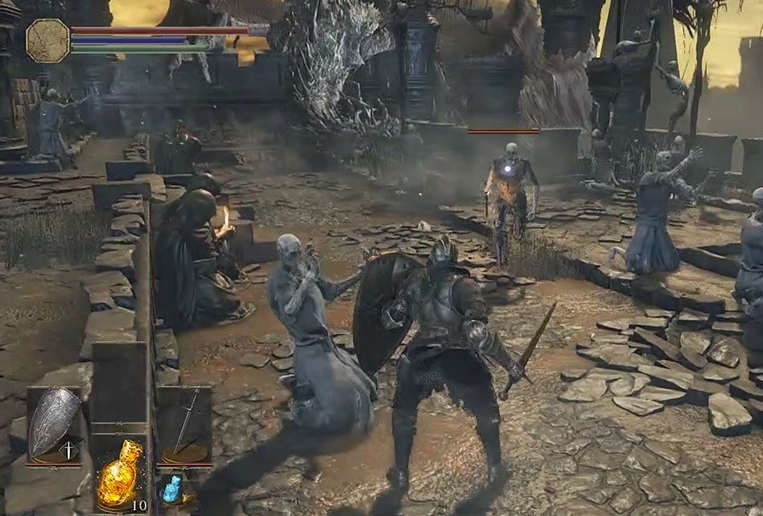 Rolling in Dark Souls 3 requires less stamina than previous SoulsBorne games. In tandem with that, its invincibility frames are as effective as ever. Furthermore, dodging is the preferable way to avoid damage against most of the enemies in Dark Souls 3. Although there are a few situations where the resilience of a big shield can be helpful, if you decide to go for a low or medium armored character that dual wields or uses a two-handed weapon, you will find yourself capable of killing everything in the game as good if not better than a tanky character. Gamers might require warzone hack to make the game more interesting.

While I currently have a heavily armored character with a shield, if I could go back I would probably roll a Thief and have fun wrecking enemies with daggers and a bow while dodging everything they throw at me. Rolling around is just too fun.

HOW TO SPEND YOUR SOULS 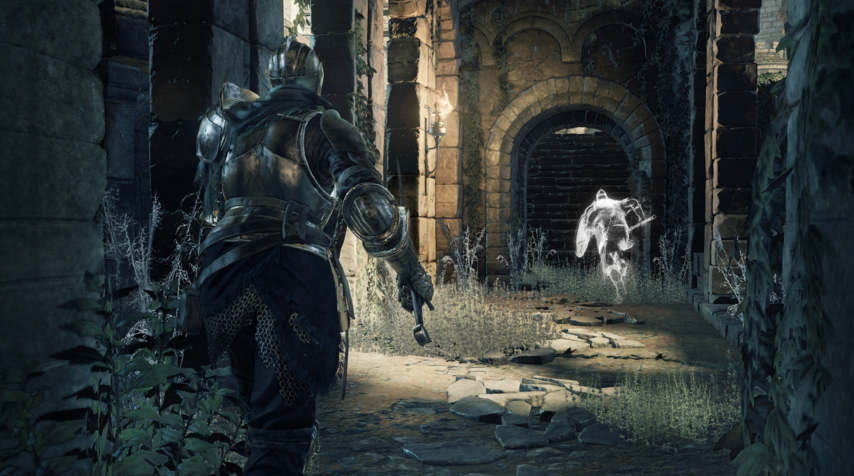 As in the previous Souls games, there’s just one main currency, souls. You get these by killing enemies, or by using certain items that are more-or-less freeze-dried baddie essence.

Souls are used when you level-up, but they are also used to buy items from merchants and to upgrade your weapons. That means you need to think strategically about which parts of your character you’re going to improve, particularly after taking down a boss.

The price of levelling up does not change depending on the stat you pick, either, only the level you’re currently at (the price increases with each level). This too makes choosing the stat to upgrade tricky. There’s no heading back to improve your flagging Endurance stat cheaply a few hours down the line.

How to use weapon skills 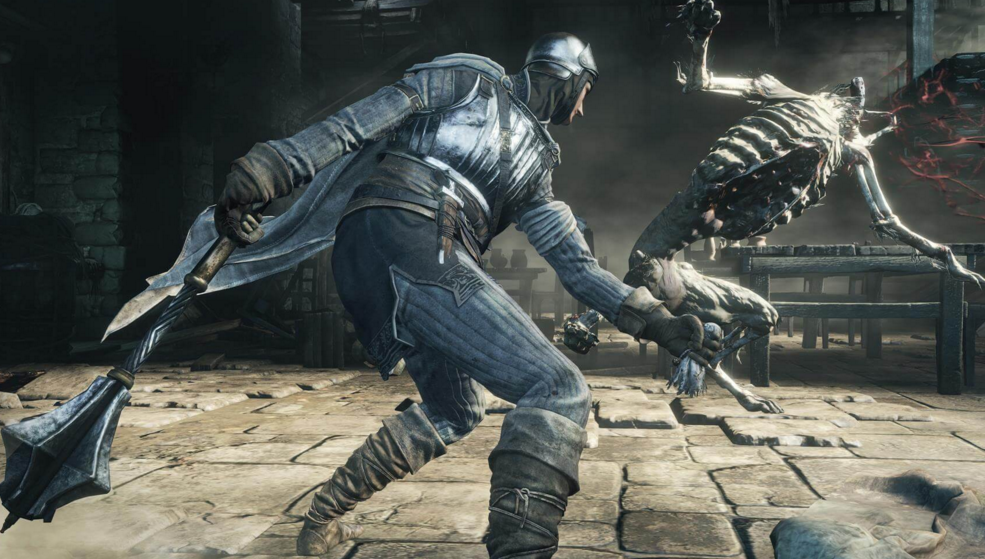 One of Dark Souls 3‘s most exciting new features is its weapon skills. Every weapon has one, and they range from forgettable to remarkably powerful. You can see the name of the skill associated with each weapon under its stats. Note that weapon skills require FP, which is the blue bar to the top right of the screen. They all require varying amounts of FP, and FP can be restored by using the blue flask found in the first area of the game. You can specify how many charges of the regular Estus flask and the FP-oriented flask you would like to carry around by visiting the Blacksmith in Firelink Shrine.

To use a weapon skill, you will first need to hold your weapon with both hands. No, you can’t use weapon skills with a shield out. Then, simply press L1/LB to initiate the skill. Since each weapon skill is different, you’ll want to practice using them to ensure that you’re able to use them in a timely manner in the heat of battle.

HOW TO RECOVER LOST SOULS 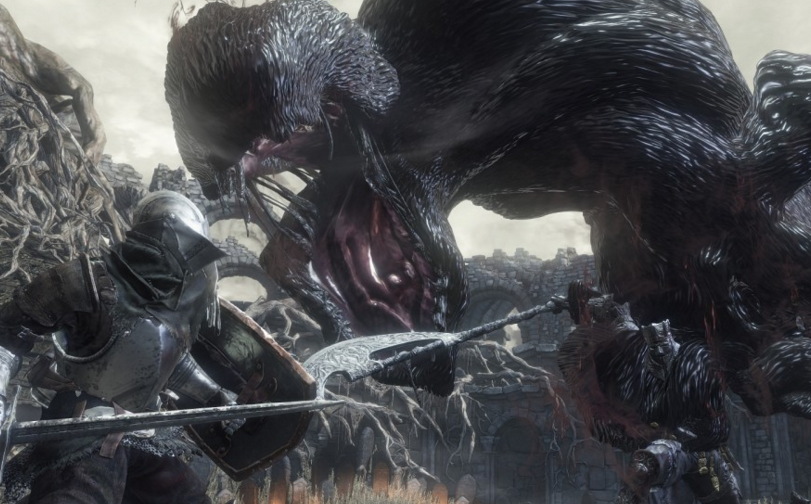 This one is nothing new to fans of the series, but if you’re yet to play a Souls game, it’s important to know what happens when you die. You lose any souls you’re carrying, but keep all your items. At times you might even want to spring to grab a bit of treasure, even if you’re certain you won’t make it back.

When you die, your Souls are left roughly where you perished. You can return upon respawning and pick them up. But if you die again en route, they’re lost for good. So if you’re feeling totally disheartened, not able to make it past a boss, you can grind out experience to a certain extent.

It’s generally more effective to develop your fighting strategy than your stats at these points. Painful as doing so can be.

I spent hours wondering where in the world the White Sign Soapstone was, only to find out later that it’s purchased by a merchant in Firelink Shrine. This item, as you may be aware from previous SoulsBorne games, allows you to co-op with other players. The co-op system in Dark Souls 3 is very friendly and rewarding, meaning that you will want to spend some time helping others, and summoning help when you feel you need it.

The White Sign Soapstone costs only 500 souls, so be sure to buy it early on.

USE A SHIELD TO BLOCK PROJECTILES, ROLL TO BLOCK MELEE ATTACKS 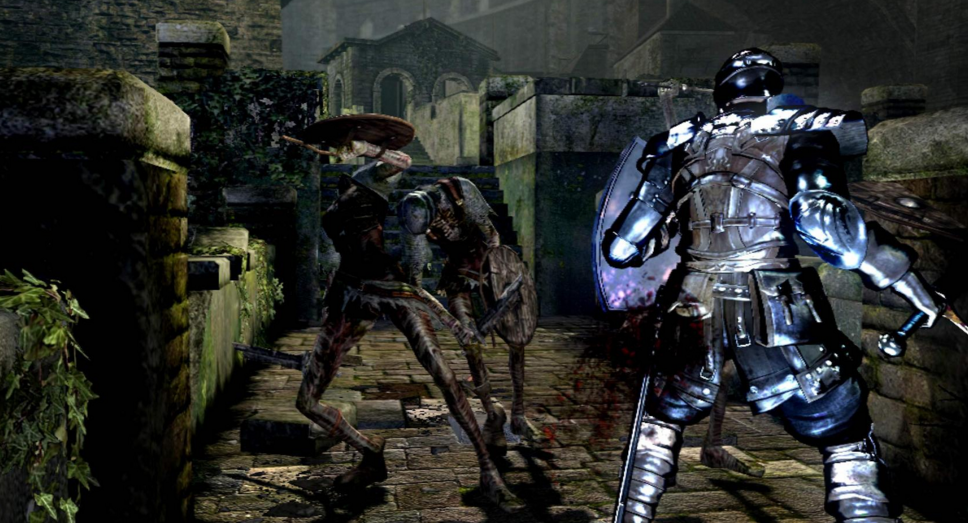 There are lots of ways to play Dark Souls 3. As with Dark Souls 2, there are several different character classes that dramatically change how you’ll take on enemies. However, in a basic sense Dark Souls 3 combat is something of a mash-up of the styles of Bloodborne and Dark Souls 2.

You get the shields of Dark Souls 2, with more of the character speed and reaction times of Bloodborne.

There’s no one fool-proof combat strategy for this game, but I’ve had most luck using a shield to avoid ranged attacks and roll-dodging in close-quarters combat. It is, at the very least, a good place to start if you’re a non-magic user.

There are free level ups available 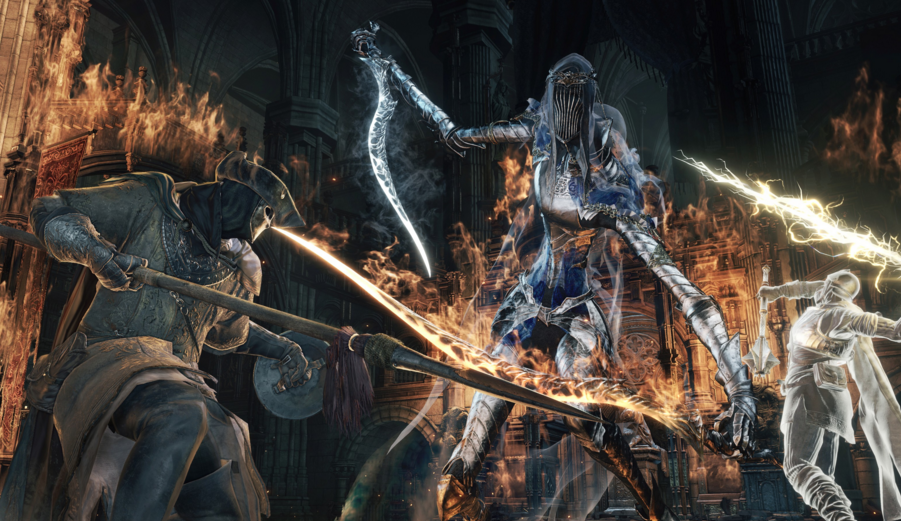 A couple hours into the game you will enter a place called Undead Settlement. In this area you will meet an NPC named Yoel, who after a brief discussion will head to Firelink Shrine where he will become a permanent resident.

It’s easy to forget about this exchange, and never see Yoel again. However, if you visit him in his dark corner of Firelink Shrine he will provide free levels for you. A total of five free levels are available, with one condition: you can only earn subsequent free levels by dying a certain number of times. Consequently, you can’t just walk up to him and get all five free levels. Instead, they have to be spread out over time. Don’t forget to utilize this resource early on to take full advantage of it. 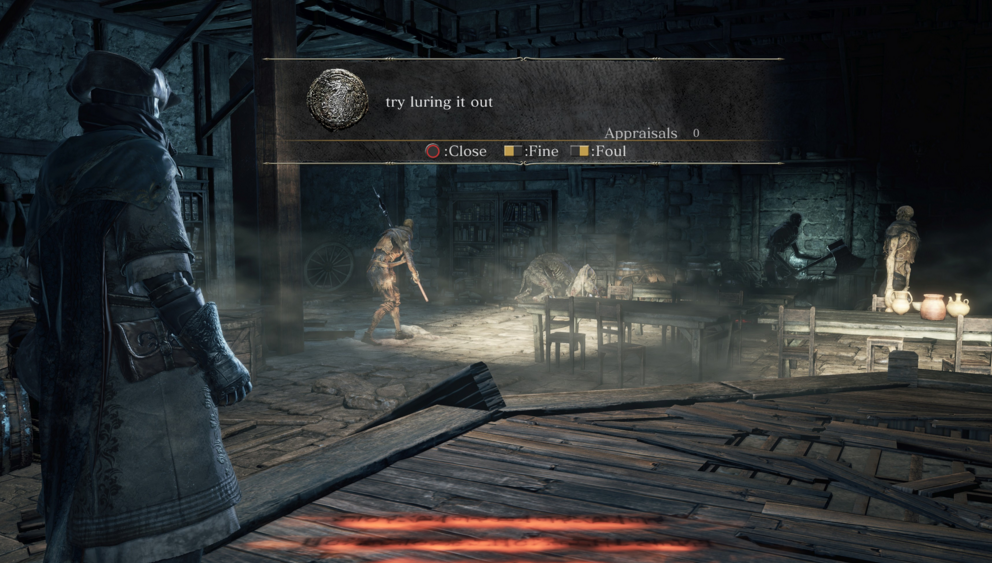 Feel free to skip this one if you’re familiar with the Souls games. But let’s have a quick primer on how progression goes in Dark Souls 3.

Bosses are the major milestones in the game. These fights are exponentially harder than the rest of the game, where it’s generally not too hard to survive in the ‘main’ parts of the game world once you know the basic layout of areas.

This seems obvious. It is what bosses are for in any game, right? However, not since the 90s have bosses proved quite as much of a road block as they are in Dark Souls 3 and its brothers.

In-between these moments you progress by a) levelling-up and b) finding bonfires. Bonfires act as Dark Souls 3’s way points. You are resurrected there when you die, and these are the points you’re able to fast-travel to.

Magic is weak until later levels 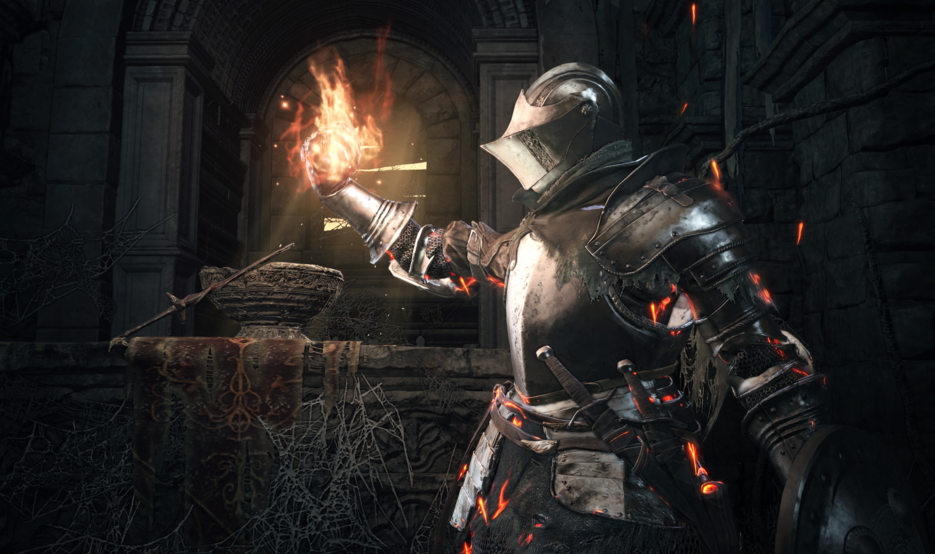 Although FromSoftware has taken some steps to provide good build diversity, balancing of magic-based classes is poor. Their effectiveness is not as reliable as melee oriented builds that focus on strength and/or dexterity.

It isn’t until you place around 45 to 50 points into Faith or Intelligence that the effectiveness of spells is strong enough to become a primary means of damage output and survival. As a result, pure mage builds are at a huge disadvantage for most of the game. Hybrid builds perform well, but won’t see strong damage throughput with spells until hitting 100+ Soul level, at which point you’ve probably finished the game. I suspect that powerful magic builds will be popular in high level PvP, but rarely found elsewhere.

The Knight is the most powerful starting class 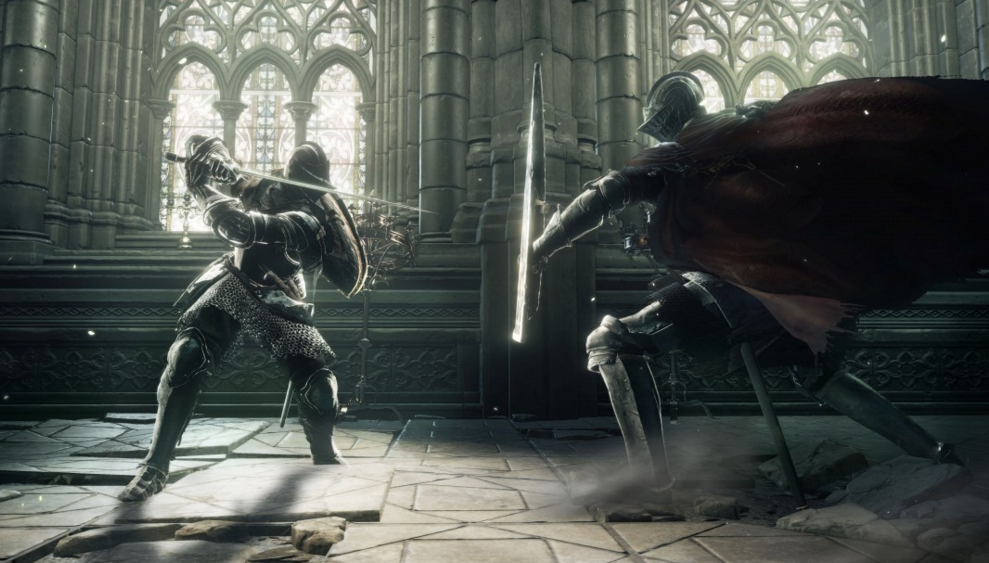 Look, not everyone wants to be a heavily armored warrior that struts around with a shield. However, there is no starting class that is easier to complete the game with than the Knight. Its starting armor and 100% absorption shield last for the entire adventure, and the starting weapon has a fantastic, fast primary swing. It also has a great balance of starting stats, meaning that you can min/max effectively, provided that you’re aiming for a strength or dexterity oriented build.

Mercenary and Warrior aren’t bad choices, either, but their starting armor isn’t nearly as powerful.

The flask system has changed

In Dark Souls 3 you are provided with two types of flasks, one that is used to heal your HP, and another that restores FP. By visiting the Blacksmith in Firelink Shrine you can specify how many charges of each of these two flasks that you want to carry. Early on it’s best to dump all your charges in the HP restoring flask, but later on you’ll find weapons that have awesome skills that require FP to use.

In addition to the dual-flask system, there are two types of items that you’ll want to look out for to increase the effectiveness of your flasks. One is the Estus Shard, which increases the amount of times that you can use your flasks until you need to revisit a Bonfire. The other is the Undead Bone shard, which is more rare and increases the potency of each flask usage. Finding these items is pivotal to making the game easier for yourself.

You can skip dangerous enemies

I am nearing the end of the game, and I recall two places where I found myself stuck and frustrated. What I came to find out through trial and error is that I was able to skip these sections by running through them and avoiding attacks from the enemies I was worried about. The world is very carefully designed to allow you to skip enemies if you feel the need to, and most of them will shed aggro after running a short distance.

This method is particularly effective when you are busy trying to kill a boss and don’t want to waste time killing regular enemies on your way to the boss encounter.

Boss Souls can be traded in at Firelink Shrine

Trading in Boss Souls is very simple. You literally just walk up to an NPC in Firelink Shrine and decide which of two item choices you want per Boss Soul. Since Boss Souls can be traded in for some of Dark Souls 3‘s best weapons and equipment, you will want to take advantage of the feature early on. There is one item in particular that you can earn from one of the first Boss Souls you acquire that will help you get off to a good start in your adventure.

It’s worth noting that a key item is required to trade in Boss Souls. It is earned from an optional boss just a few hours into the adventure.

Pay attention to your surroundings

Dark Souls 3 is the first game in the series where if you see something in the distance, you can visit it. The world is one contiguous place, which is a nice touch.

One commonly overlooked quality of this is that you can look out into the distance to view areas that you haven’t been to. There are times that you may find yourself lost, and by paying attention to the environment you can get an idea of which direction you need to head toward.